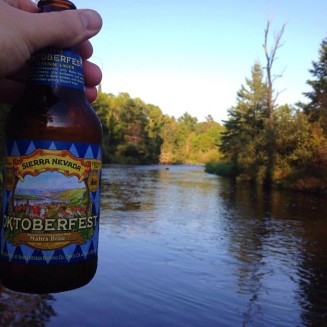 It’s about high time I wrote on a beer from Sierra Nevada, a pioneer, a staple and a true favorite brewery of mine.

The brewery is legendary for its pervasive Pale Ale and legacy as a trailblazer in the craft beer industry, dating back to 1978. I didn’t realize how significant the company’s influence was until I read “Beyond the Pale” by brewery founder Ken Grossman. I highly recommend it.

As the book titles indicates, Sierra Nevada is more than a great pale ale. The brewery makes consistent, balanced beers of all styles. I especially look forward to the fresh-hopped Celebration Ale toward the end of every year.

This year the wait is tempered by the arrival of crisp, flavorful Oktoberfest. It is the second lager collaboration Sierra Nevada has done with a brewery in Germany—this time  Mahrs Bräu, of Bamberg.

I am a fan of the 2015 version made with Brauhaus Riegele. I drank my fair share of it before it left the shelves.

How wunderbar that not only is Sierra Nevada doing another collab, but it turned out awesome.

The 2016 Oktoberfest is lighter, but malty enough, with a blitz of spicy noble hops.

Sierra Nevada indicates that it is brewed with a number of relatively unsung American and German hops—magnum, palisade, saphir, crystal and record, which the brewery says has been “nearly forgotten.”

Nearly forgotten?! I’ve never heard of it, but this scheiss is great!

Just as refreshing as this beer, is the fact that Sierra Nevada continues to do new, genuinely interesting things. I see many veteran breweries throw themselves at cringe-worthy fads or simply go stale.

With a dedication to the beers it makes well combined with a willingness to branch out through Beer Camp and other collaborations like this, Sierra Nevada keeps it interesting and keeps its crown as one of the best in the business. They might even be the first brewery to make a tasteful Oktoberfest-themed game.

This Mahrs Bräu collaboration will likely remain my go-to light lager for the rest of 2016, preferably with some good butterkäse and crackers.

I am proud of the brewing scene in Northwest Wisconsin. Breweries are relatively sparse over a large area spanning from the Chippewa River to Lake Superior, but most of the dozen or so make great beer. Some are among the oldest microbreweries in the Midwest—South Shore in Ashland and the one and only brewery in my county, Valkyrie. More recently, Hudson, Hayward, Superior, Menomonie, Somerset and other towns have become home to some skilled brewers serving beer in distinct spaces with great character. Oh, and there’s good old Leinenkugels.

Soon, the region may have its first mid-size craft brewer. After months of negotiating terms with the City of Eau Claire—without little evidence of progress—The Brewing Projekt reached an agreement to move into a larger, vacant space across the street from its current site in the heart of Eau Claire. The news came after a rally attended by more than 500 people, including myself. What a fun affair, with music, great weather and a dozen style-shifting, flavor-packed beers on tap.

It had been an extra-long time coming for these brewers, who had to cut through a considerable amount of red tape just to be licensed to brew, in large part because owner William Glass also owned Fire House bar in Eau Claire.

But where there’s a will there’s a way. Now, the Brewing Projekt envisions its new space as a destination brewery. It is my hope that the “Projekt” will be a stepping stone to making Eau Claire a destination city for beer lovers. Though much different than The Projekt, a block down Oxford Avenue, Lazy Monk Brewing makes superb representations of classic Central European styles—more about that here. Further, K Point Brewing is growing on the south side, Brewster Bros. and, of course, good old Leinenkugels up the road in Chippewa Falls. There are many more within 30 miles of Eau Claire, all serving beer on par in quality as that of most breweries in Madison, Milwaukee or the Twin Cities.

But let’s get back to the beer. My first from The Projekt, and a delight during the dog days of summer, WISCoast Pale Ale is a good introduction to the brewery’s distinct lineup.

First of all, having grown up on a Wisconsin dairy farm, I’ll drink anything with a cow on it. Citrusy hops and wheat make this an incredibly fruity, refreshing beer. The Brewing Projekt states, “Crafted to be wickedly crisp and totally refreshing.” Agreed.

Don’t wait for the expansion to visit The Brewing Projekt. Make a day or weekend of it. Eau Claire is very cool.

We had such a great interview with Ryan Verdon of Real Deal Brewing that we couldn’t bear to cut the show down to a half hour. We talk about this Menomonie (WI) nanobrewery’s sessionable English-style beers, as opposed to “Barrel-aged barleywines of death.” Plus, Carl and I review a Porter all the way from Green Man Brewing in Asheville, North Carolina and look back at some classic beer commercials. “It works every time”

Beer of the Week: Surly Xtra-Citra

Disclaimer: I am not a hophead. I don’t go crazy for IBU bombs. I might even say IPA is my least favorite style.

However, every once in a while I get a craving for a crisp, fruity IPA. Such an effect is often created with a good dose of Citra Hops.

A beer company rep I talked to recently referred to the hops as “Almighty Citra” for its popularity and difficulty to obtain in large quantities. Other breweries have had more luck, such as Marz Community Brewing Co.

There are also the hop hanchos at the well-known Minneapolis, Minnesota brewery Surly. Unlike the hop-loving public, I don’t seek out Furious, Abrasive or Overrated often.

But one of the latest releases, Xtra-Citra, had me intrigued. The beer screams summer from its sun-yellow can its sessionably low abv (4.5%) to the obvious fruity, spry Citra flavor.

My fridge void of a light, crisp ale in an adventure-ready can, I picked up four tallboys of Xtra-Citra.

Surly is generous in providing information on the ingredients on its website. The beer pours bright golden with an airy, white head. Fresh fruity, grassy aromas follow. The taste is more of the same. There’s lemon-lime and tangerine fruitiness, and a bitter, grassy, almost-saison like finish, likely helped by the Warrior bittering hops and English ale yeast.

As a showcase for Citra, this ale nails it.

But for this malt man, the citra is a little over-the-top. I like my citra balanced with a fuller body and another flavor/aroma hop like cascade.

Ideally, I’d have this beer on occasions where any fresh, light beer tastes good—on a hot day after manual labor, while fishing, between paddle strokes in a kayak or around a campfire with roasted hot dogs.

On this episode, we guess what beers presidential candidates are drinking,  review 3 Sheeps First Kiss pale ale and discuss few other Wisconsin breweries and a few more in Duluth, MN. Cheers!